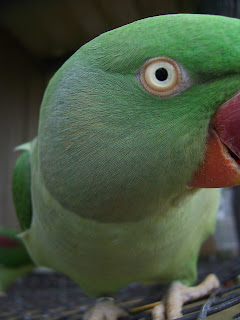 A while back I wrote a bit of an expose in my blog about what has been transpiring in the parrot industry. It is no secret that internet marketers are teaching money hungry entrepreneurs to grab onto a niche market and sell “information.” Needless to say the parrot community is one of the more recent victims of these practices. The evidence is all over the internet. New sites are popping up every day and the tactics get sneakier and sneakier. One that really seems to have exploded is what I call the “bogus blog”

What you usually see is a blog that is presented as someone’s personal journal through parrot owning. When you dig a bit deeper you see the post is not really their personal story, but appears to be a reposting of something you may have read elsewhere. It seems like perhaps their content might have been provided by someone else…perhaps an internet marketer’s stock supply of articles? Maybe? Often when you click on their profile for more information, under “occupation” or “areas of interest” they even boldly say “internet marketing” Usually these folks are affiliates for the main company selling the parrot training information, toys, or other products. At some point in their blog readers will be directed towards the bloggers “new favorite product.” Ah, the real reason for the blog is revealed! I have no problem with affiliates. I have no problem with people selling stuff. I do have a problem with someone misrepresenting themselves as an innocent consumer with no hidden agenda. I think they should admit that they are on the payroll.

Another new trend is inserting words into a blog that are often searched on the internet like “Viagra” or “insurance.” The words have nothing to do with the subject of the blog. At the end of the blog is the link to the parrot website. I don’t usually like to give links to these examples so as not to give those sites more traffic. But this one is the perfect example of many of the problems. http://baeisfds.blogspot.com/2008/07/get-your-quaker-parrot-talking.html First it starts with a bogus blog with the non related words inserted. Then it sends you to a parrot site that is laden with ads, including a youtube clip from avian veterinarian Ellen Cook that they do not have rights to post on their site. http://www.train-parrot.com/ It also includes articles from some of the people most notorious for aiming to make a buck via massive internet marketing.

In some ways these sites are a blessing. The more “hard sell” sites that crop up, perhaps the more people will be questioning the purpose of these many parrot related sites. Are they there to rip off the innocent consumer or are they legitimate sellers with solid information and the credentials to back it up. Perhaps the consumer will be forced to be a more cautious shopper. I hope so …….for the sake of their birds.

On a positive note there are some fabulous legitimate blogs out there. I love hearing about Melanie and Stewie, Sid Price offers good solid free advice…no strings attached, as does Raz.
Patricia Sund also has a new blog that showcases her adventures in the parrot world. These sites are based in the science of behavior analysis, written by people with no hidden agendas who truly love parrots and training. And while they are often kind enough to mention Good Bird Inc, they are not on the payroll :) Visit them for great information.
Posted by Barbara Heidenreich at 4:04 PM 4 comments: 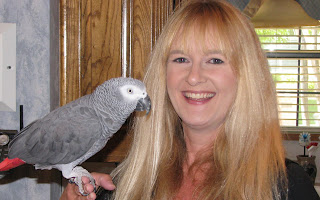 I thought I would post a short note on a new parrot friend of mine named Einstein. She is featured on one of our recent podcasts (Visit Wings n' Things at http://www.petliferadio.com/)

Einstein is not the same one that appeared on Pet Star, but she has a pretty extensive vocabulary. You get a sample of her skills on the podcast. Check her out and also the article on her in the latest issue of Good Bird Magazine http://www.goodbirdinc.com/magazine.html

Enjoy!
Photo courtesy of www.Einsteinparrot.com
Posted by Barbara Heidenreich at 7:09 PM No comments:

When Good Parrot Behavior Breaks Down 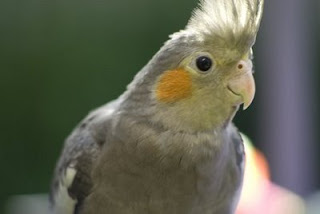 At a recent zoo consultation I found myself in a bit of a pickle. A department I have been working with for a number of years had experienced a great deal of turn over due to things like births of new babies, health issues, etc. This left them a bit short handed. They also moved their entire group of animals to another part of the zoo. This meant lots of work for the staff and little time.

The end result was much of the good work we had done training dozens of animals was starting to break down. Attaining a training goal doesn’t mean it will stick permanently. We still need to continue to reinforce desired behavior in order for it to be maintained. On the flip side if a behavior breaks down it also is not lost forever.

For example some chickens that were very well trained to enter a kennel, were starting to choose to move away from people when they approached. This was the opposite behavior from what had been trained. What happened? It was discovered that when the chickens are a little slow to go into their nighttime holding enclosure they were being shooed inside (negative reinforcement.) by some individuals. To get back on track caregivers may need to ask for smaller approximations they can positively reinforce to get the chickens moving towards a target, kennel, enclosure or person. They may also want to try to retrain the behavior throughout the day when there is not an immediate pressure for the birds to shift. The good news is usually a behavior can get back on track in just a few sessions or less.

So how does this relate to your parrots in your home? Well, I can think of a number of times I have been in a household and watched behavior breakdown because not everyone in the house was using the same approach to influence behavior. For example I can think of a screaming cockatoo that was never reinforced for screaming by the mom in the home, but occasionally reinforced by her teenage son who would run to retrieve the bird when the parrot screamed. This intermittent schedule of reinforcement kept that behavior strong!

Or how about the cockatiel that never once was forced to step onto the hand until a new baby entered the household? An innocent grab towards the bird by the child caused the parents to occasionally push into the bird’s chest and scoop him up for his own safety. Next thing they know their sweet angel of a bird is beginning to bite at fingers to protest the coercion he had never known before.

Keep in mind that very rarely do we need to resort to coercion to get behavior. Positive reinforcement creates quick, reliable, repeatable behavior. And often behaviors trained with positive reinforcement can be learned in one or two sessions. Try to arrange situations so that your parrot can easily achieve the desired behavior and then challenge yourself to positively reinforce every time your bird does what you want. It is not just about training sessions. It is about every time you interact with your companion parrot. Practice this and you will find your parrot’s good behavior can become very strong and resistant to breaking down.
Copyright 2008 Good Bird Inc. http://www.goodbirdinc.com/
Posted by Barbara Heidenreich at 6:51 PM 3 comments: