My butt started buzzing out of control. Zzzt. Zzzt. Zzzt. Hard to ignore. However, on that Sunday I was lecturing to a very attentive group of veterinary professionals devoted to making the lives of parrots better. At the break, I checked my phone to see what all the incessant messaging was about. It was the weekend of hurricane Harvey pummeling Texas, but the worst had passed already on this trip away from home and my town was spared. Turns out Harvey did have a sucker punch in store for me and the bird world after all. 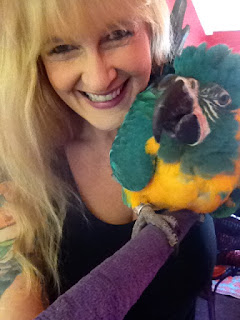 Many people are familiar with the Blue-Throated Macaw, Blu Lu that resides with me. She came to live with me at the request of Laney Rickman. Laney was the founder of a parrot conservation organization called the Bird Endowment. This organization focuses on saving Blue-Throated Macaws by keeping a genetically diverse flock in Texas in the event the wild population were to go extinct. (There are only about 300 birds left in the wild.) The captive population is managed so that they are behaviorally as wild as possible in a captive setting. Blu Lu had been rejected by her parents and had to be hand raised. Behaviorally she was inappropriate for the group. I agreed to take her if we (Blu Lu and I) continued to raise awareness and funding for the conservation efforts of the organization in the wild.  The Bird Endowment also heavily focuses on supporting Blue-Throated Macaw conservation in the wild by partnering with Armonia to put up nest boxes to increase the population. This is the one thing that has proven to be successful in making a difference in helping these birds in the wild. 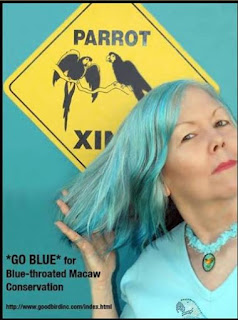 I was at a companion parrot event and Laney was a guest speaker. Laney shared her story of being an ad executive making a hefty paycheck in Houston. She had a small companion parrot she enjoyed who inspired her to volunteer at the Houston Zoo. At that zoo, she had the pleasure of working with some Blue-Throated Macaws. It was at that zoo she learned of how unlikely it was this species would be around much longer in the wild. She also learned there really was no champion for their conservation efforts.

Laney was also a huge fan of blues music, another interest we shared. She told the story of how she had seen an interview with Eric Clapton in which someone asked him why he was so interested in preserving the history of blues music and he said, “Well if I don’t do it, who will?” That one sentence was a game changer.

Laney pooled her savings from her ad exec career, her passion for parrots and the “if I don’t do it, who will?” attitude and instituted a full-fledged conservation program that actually made a difference.  Overhead was kept to a minimum and funds really went to helping birds.

Did I love that she named all the birds she cared for after blues artists…hell yeah! And I named Blu Lu after Blu Lu Barker an old obscure singer from the 1940’s.  I also loved that when I challenged people to put a little blue in their hair to raise awareness for Blue-Throated Macaws, Laney dyed her entire head of hair blue! And it looked great on her. She lived in a small conservative Texas town, the blue hair was a brave move she once told me.

That small town was hit by hurricane Harvey too leaving people scrambling and shorthanded. Laney wasn't getting the diagnosis, treatment, care and attention she needed for an obvious serious medical problem. She was sent home. And when the worst of hit, it was too late.

Laney always talked about coming into Austin to see some music. She was one of the few who always liked my music posts on social media. I like to think she is attending the best blues concert ever right now with all her favorite artists.  She certainly deserves it.  There are lots of clichés that come to mind when we lose someone. Life is too short. Live the life you love, love the life you live. Make each moment count, etc., etc., etc. The lesson that comes to mind for me when I think of Laney is “Leave a legacy.” She most certainly did. The sky really is crying Laney. We do miss you. But you did what you set out to do. Thank you for showing us the impact ONE person can have on saving wildlife.
Barbara

PS Many want to know what happens to the Bird Endowment without Laney. Nido Adoptivo will continue on for this next season as Laney would have wanted.

Posted by Barbara Heidenreich at 11:40 AM 5 comments: This summer I was very actively training a lot of birds every single day in preparation for a new free flight bird show. While this may sound like a dream job for some….and yes it can be, at times it can also be rather repetitive. That is because progressing through some behaviors can sometimes be monotonous. Some behaviors require repetition or very slight increases in criteria. And some behaviors may require relaxing of criteria. And some individuals may be working on the same behavior but be at a different place in the process. This means practicing the same things over and over for the trainer. This can be a good thing IF the trainer is paying attention. But one thing that can very easily happen is a trainer can become complacent and fall into a routine of automatically making changes in criteria without actually looking at the animal’s behavioral response.
For example, we were working on training a flock of Quaker parrots to carry a stick back to a nest. This behavior in its simplest form is really a retrieve . However, there are many components to consider. The components for various birds included holding onto the stick, taking the first stick offered, flying distances, flying without latency , flying with more than one bird, entering a crate for reinforcers, entering the crate with more than one bird at a time, flying to different people with sticks, flying though an opening, placing the stick in the right place, and so on.
As with any behavior it is helpful to have a picture in one’s mind as to what the final behavior goal is and what elements that includes so that each criterion can be added one by one as they are mastered. With multiple animals, that also means knowing where each animal is in that process.
An easy trap to fall into is going into autopilot and raising criteria without paying attention to how the bird did on the previous repetition. For example, I would sometimes see trainers ask for a rep, get a poor response and then automatically ask a bird to fly a farther distance. Uh oh! There’s that pesky autopilot turning on. My rule of thumb for raising criteria is if I get one or two perfect reps, then I will try increasing criteria. If the bird fails one or two times at the criteria I have set, then I relax my criteria to something at which the animal can be successful. This helps keep my animal wanting to participate in the session.
Another trap to watch out for is raising more than one criterion at a time. We had two birds learn to drop the first stick offered. This eventually turned into dropping many sticks before finally taking one to fly back to the nest. This behavior needed to be fixed before adding the criterion of flying distance to the nest could be added again. Working on more than one criterion at a time is tempting, but confusing to the animal. Get one aspect mastered before adding on another.
I had to head back home before the Quakers finished their training for their new behavior. Here is just a peak at some of the work.  I hear they are doing well! Can’t wait to see the final routine once it is finished. In the meantime, practice raising one criterion at a time with your animals as well as making sure you are ready to raise criteria by paying close attention to your animal’s progress during a session.
~ Barbara
PS If you want to learn more about the basics of training parrots, try these resources
How to Train Your Parrot https://vimeo.com/ondemand/trainyourparrot
Train Your Parrot to Step Up https://vimeo.com/ondemand/parrotstepup
Flight Training for Companion Parrots https://vimeo.com/ondemand/parrotflight
Stress Free Veterinary Care for Companion Parrots https://vimeo.com/ondemand/parrotvetcare
Becoming a Better Parrot Trainer. Practical Application Skills That Make a Difference https://vimeo.com/ondemand/parrothandlingskills

Posted by Barbara Heidenreich at 7:16 PM No comments: