5 Things You Should Know About Parrots 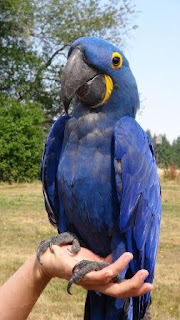 You may be new to sharing your life with parrots or you may be an old pro. Or perhaps you have never even considered a parrot. Either way you may be surprised to learn a few facts about parrot behavior that make them a bit different from your average companion animal. Here are a few of my favorites.

1.    Parrots prefer to have their head feathers stroked towards their beak. While your dog, cat or rabbit may appreciate being stroked from head to tail, this is often merely tolerated or it can be sexually stimulating to companion parrots.  Look at your bird’s body language to clue you in as to whether your parrot is just taking it or can’t get enough. If your parrot is squatting, trembling or panting it is a good idea to reconsider this practice. A bird that is tolerating it isn’t really the goal either. I prefer to see a parrot who fluffs his head feathers up in a big ball in anticipation of a few head scritches. Touch on the head is definitely a great way to foster your relationship. Allopreening (grooming each other’s feathers) is an important part of parrot social relationships. Parrots can’t reach those pin feathers (new feathers growing in) on their head, having their human companion remove the keratin casing on newly grown feathers is usually quite welcomed. Check out this video clip on how to pet a parrot to see what touch should look like.


2.    Parrots show love by puking for us. Isn’t that a fun one? Yes it is a true. A parrot who has decided you are its chosen mate will express its love by regurgitating for you. The beak will be brought to the chest and the head will arc in a repetitive motion as food is brought back up into the mouth. The bird may try to dribble this usually smelly gooey mush into your hand if you make it available. This courtship behavior is also one that caregivers will want to avoid reinforcing. This means removing your attention the moment the behavior is exhibited. Wait for the bird to present any other acceptable behavior and reinforce that instead. Reinforcing courtship and sexual behavior can contribute to a number of behavior problems such as aggressive behavior towards other members of the household, excessive vocalizations for attention and more. Learn more on how to address these problems from the webinar recording Solutions for Parrot Behavior Problems Related to Hormones.

3.    Just because a parrot has feathers doesn’t mean it can fly well. In some countries it is common to clip the flight feathers on parrots right about the time the bird would first attempt flight. If this happens (or the parrot is kept in an enclosure that is too small to allow flight) during that time in development when flight should be happening, it can lead to a loss in flight for the rest of that bird’s life. This is especially true for heavy bodied birds such as Amazons, macaws and African grey parrots. Some people may have an older parrot that now has full flight feathers but never flies unless startled. These typically are the birds that were clipped during this critical stage of development in which their genetics would have been urging their body to attempt flight. Instead of flight, each launch off of the perch would have been met with a crash landing. This quickly teaches the bird to stop attempting flight. Unfortunately it has an impact that can have a lifetime effect on flying. Lighter bodied birds such as budgerigars, cockatiels, conures, some cockatoo species and a few other smaller species of parrots can regain flight. But unfortunately for many of the larger species, even with excellent training, a confident flying bird in most cases is very unlikely. It is often best to provide as an enriched a life as possible without flight for such individuals. If your bird was never clipped or has sufficiently recovered flight, training with positive reinforcement does offer solutions for managing the behavior of flighted parrots those who are interested in keeping parrots flighted. Behaviors such as recall, station training and developing flight skills make living with flighted parrots a pleasure.

4.    Parrots are super-duper visual. Your dog has a super sniffer. Your cat hears the slightest rustle of a cockroach in debris. Your parrot can see the tiniest speck of a spider on the ceiling or teeny tiny airplane in the sky. This means he is also carefully watching you. Especially if he is interested in your attention and companionship. If you have a parrot that has the problem of vocalizing for attention this is important to know. This is because one of your goals is not to reinforce the undesired vocalizations. Often we think we are ignoring the calls, but many times things like our moving shadow on the wall, or the body language of the dog responding to us (even though we are out of line of sight) is enough to clue our parrots in that we are just there around the corner. This can be enough to keep a parrot screaming for attention. This is often a reason why people have a hard time being successful at resolving this behavior problem. Learn more about how to address this common parrot behavior from the webinar recording Addressing Screaming for Attention in Companion Parrots. 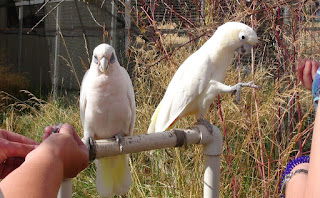 5.    Parrot friendships can take time, but can be extremely rewarding. Most of us are accustomed to meeting a dog or cat and within minutes being able to interact with our new furry friend. Certainly there are exceptions, but in general most dogs and cats friendships seem easily earned compared to parrots. Many parrot species are not as social as we might think. In the wild they live with only one partner or small family groups. Flocking may only happen under certain circumstances such as foraging or roosting.  Therefore automatically accepting new individuals may not be the norm for those species. Some parrots species also show a tendency towards neophobia (fear of new things). This can also inhibit a parrot’s inclination to warm up to new people. Learning history also plays a role in how quickly a parrot may be inclined to respond to a new potential friend. That is where training can help. Teaching your parrot some simple behaviors (like waving, saying hello, or turning around on cue) to present with strangers can help give your parrot an activity to focus on that has past reinforcement history that can be paired with new people. This can go a long way in helping build trust with new people and experiences. It may take a little more effort than some of our more gregarious companion animals, but what an honor when a parrot decides your company is delightful.

Whatever species you share your life with; it is about getting to know them. Parrots have characteristics that are unique to them, but like any animal they are also influenced by learning history. This means behavior also has flexibility to some extent. Unfortunately we can really miss the boat on flight if we don’t allow birds to fledge properly when nature is telling their bodies to do so. However we can definitely still influence things like building trust, addressing vocalizing for attention, preventing behavior problems associated with reproductive behavior and more by getting a good understanding of learning theory and how it applies to the behavior of animals in our home. Even though your parrot’s behavior may present challenges that might be a bit different from your dog or cat, don’t give up! They are often eager students and ready to learn. Check out more resources on parrot behavior at www.GoodBirdInc.com.

Posted by Barbara Heidenreich at 1:35 PM No comments: