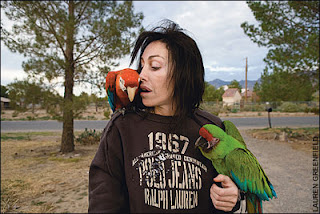 Like a lot of parrot lovers I was anxious to see the new Heidi Fleiss Prostitutes to Parrots program on Animal Planet. I had known it was in the works for quite a while now. The name Heidi Fleiss immediately conjures up all sorts of salacious stories and no doubt was the hook to get people to watch. However as a parrot person my hook was the twenty macaws! Finally a program featuring parrots. There are millions of parrot people who have been waiting for the world to learn what we already know. Sharing your life with a parrot can be truly amazing.

Clearly Heidi adores her parrots and her concern for their well being is genuine. I got that and I do think other parrots lovers could relate. However I do wonder about the folks who don’t have parrots?

The most important personalities overlooked in this program where the stars themselves, the parrots. Parrot people do tend to be labeled as crazy. Heidi herself keeps referring to herself as acting like a crazy parrot person. While there were a few things about her parrot care that could be less odd, I do understand why she loves her birds. But without spending some time focusing on what it is about parrots that makes them so important to her I don’t think the rest of the world got the message. Instead we see Heidi being obsessive and reclusive playing with a mob of macaws who don’t seem to do much of anything except take over the house and bite the hired help.

I know that is not the image I want people to see when they think about pet parrots. And I tend to think that is not what Heidi would want either. Television is a powerful tool. It can entertain but it can also educate. I think there is a huge opportunity to help people understand the powerful positive aspects of life with parrots. People can learn what makes them special, how to provide excellent care, what to do about those biting behaviors, how to provide a great habitat for them (and why spending $2000 a month on pistachios is probably not such a good thing for parrots.) I do hope if the show lasts beyond the pilot the producers will let us get to know the parrots. There is a story there that people want to see.

Right now it seems most television is about when animals attack, or about people who hoard animals or keep dangerous pets. It reminds me when it was OK to dress chimpanzees in tutus and have them ride bikes. People flocked to the attraction and money was made. However at some point somebody stood up and said that is the wrong message to send about animals. And now most of the world doesn’t support that type of animal experience.

I think we are at similar crossroads with animal related TV. Where is the television that showcases the positive impact animals have on our lives? I personally have no interest in those animal attack type programs and I have a feeling I am not alone on this one. Let me know what you think in the comments below and I will make sure to let Animal Planet know what you would like to see when it comes to parrot related television.