Parrot Excitement that Turns to Aggression 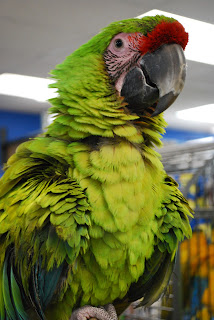 At a recent parrot training seminar I was fortunate to work with two amazing macaws. One was a Buffon’s macaw. These guys look very much like a military macaw but are much larger. In fact this big boy weighed about 1400 grams. That is heavier than some hyacinth macaws I have met! Willie was the name of the Buffon’s macaw. The other character was a green winged macaw named Nico.

Besides being macaws, what both of these birds had in common was a strong desire to make “googly eyes” at me. Perhaps I should elaborate. One of the behaviors many macaws will demonstrate involves making eye contact, usually eye pinning a bit, facial flushing and turning their hide side to side. This is sometimes accompanied by a cute vocalization such as a kiss or “hi”. This very engaging activity is quite charismatic and often gets an equally excited reaction from parrot lovers. In many cases this reinforces the antics of the parrot. However the problem with this type of interaction is that it creates a heightened level of arousal or excitement in the parrot. And quite often this can easily flip to aggressive behavior.

This excitement is not a problem if you have no intention of putting your hands or other body parts near the parrot. But if your intent is to work through a training session, this can create challenges. The first challenge is the increased risk of aggressive behavior. The second is that often the bird is so obsessed with trying to engage the trainer in a little face time that the parrot loses his focus on learning.

My strategy to address this involves a few things. In many cases talking will increase the excitement. This means I become the quietest trainer I can be. I don’t even use a bridge in those moments. I just try to deliver my reinforcer super quickly. I also avoid direct eye contact with the parrot. I usually look towards the bird’s feet. I can still see the beak, etc. but I am not encouraging more cute faces when I avoid the eyes. I also will step away if the parrot does start trying throwing out too much of the highly aroused behavior. When he settles again I restart the session.

This approach worked well with Willie and Nico and I was pleased to see both macaws presenting more calm behavior during their training sessions. Willie even learned to overcome his fear of my hand and stepped up a few times. However this was quite exciting for him too so time on the hand had to be super short to avoid nipping on clothes to get a reaction. With some more training he can learn to be calm while on the hand for longer periods of time.


Snowball the Dancing Cockatoo was also there. He can get pretty fired up during his dancing sessions. His caregiver Irena Schulz of Bird Lovers Only parrot rescue confirmed that waiting until he calms down after some dancing works well before asking Snowball to step up. Just like the macaws, trying to interact with him when he is super excited can lead to aggressive behavior.

Getting your parrot excited, dancing and in general all fired up is not off limits. It can definitely be a great reinforcer for behaviors that are hands off and already learned, or if you are quite confident it doesnt lead to aggressive behavior for your individual parrot. Just be careful to avoid it when it is time to step up or when you want your parrot to focus on learning something new if you know your parrot is inclined to flip the switch when he gets excited.