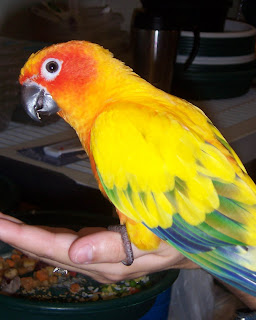 Usually readers of my publication, Good Bird Magazine, are the ones to submit success stories to me. For a change I thought I would share a success story about a parrot named Chile. Chile is a sun conure.

Chile was a bird that had been used in Education Programs for some time. However his reputation was not so great. He was known to make a piercing scream when he desired attention. He bit so hard and so often his handlers had resorted to wearing a leather glove to pick him up. He also was showing an inclination to only interact with one person. And he was doing a kamikaze launch onto the backs of passers by he seemed to dislike. In his case the target was often men. Needless to say the mere mention of his name often caused people to sigh and roll their eyes in exasperation.
But all that has changed. Now staff members talk about Chile with affection. I even heard the words "Chile" and "Superstar" used in the same sentence!
What is responsible for this change? Positive reinforcement training. The first step was to throw away the leather glove. Which in a way is symbolic of throwing away those old training strategies that rely upon coercion and aversives. Our goal was to create a situation that was so fun for Chile there would be no reason for him to bite!
We started with target training. We used a closed fist as a target. Once he mastered targeting, we worked on training him to turn in a circle on cue. This is an easy hands off behavior that helped Chile "learn how to learn."
The next step was a tough one. We really wanted Chile to learn to step up onto a bare hand. It took a bit more time to train. We used tiny approximations of using the target to encourage Chile to move towards the hand and a quick time out when the slightest aggressive behavior was presented. (You can see this exact method in my first DVD. The clip of just the portion on training step up is also available on my website. http://www.goodbirdinc.com/digitalmedia.html ) 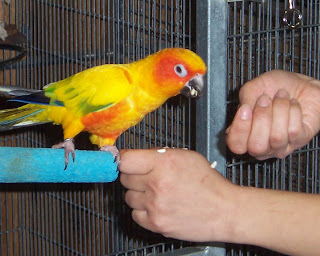 What a day it was though when he finally did it! Next thing you know he was stepping up onto new people, transporting easily in a carrier, and performing his circling behavior for school groups. He later also learned how to do a retrieve.
Now staff members are looking forward to training new behaviors with Chile. His screaming for attention has decreased dramatically. And he has even learned to like a few men.
For me, I am happy to know that Chile's life has changed for the better. Even more rewarding for me is to hear the staff members who work with Chile sharing what they have learned with others. I must admit I beam a bit like a proud mom when one of my "students" becomes the teacher. Congratulations to Chile and his trainers!
Barbara

Perfect! This is exactly the article I was looking for! I just met this woman and her 2 daughters who dispise thier poor conure. Of course they treat him poorly, so he hates them back. He only likes the man of the house, who is never around, so this might be a bird that only likes men. They gave me thier phone# so I could "take the evil bird", poor thing, I think I'll take him in.

i recently adopted two conures and am becomming increasingly afraid of them. we have other birds, cockatiels and an umbrella cockatoo that i have no problem with but conures....i have alot to learn. i am going to watch your dvd and read your articles and begin the training process. thank you so much for sharing this article. i want them to have the best possible life they can with us.