A Great Day of Parrot Training 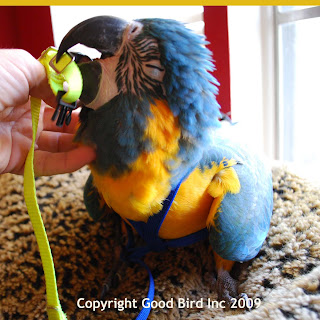 Not too many things compare to a great day of parrot training for me. And today was one of those days. Crate training is an important behavior for the two baby parrots, Jackson and Joker. They both traveled from the breeder to my house in crates. Both seemed pretty comfortable in the crates for the four hour drive, but the next day they were a bit hesitant to consider entering a crate again. (Four hours in a crate was probably a bit more than they were ready for) Since then I have been working on retraining the behavior.

I was very pleased today when both parrots entered their kennels voluntarily. I had to break it down into small steps. In other words I reinforced with treats and attention any movement towards the crate and eventually stepping inside it (Find more details on training this behavior in my second DVD Training for the Veterinary Exam). 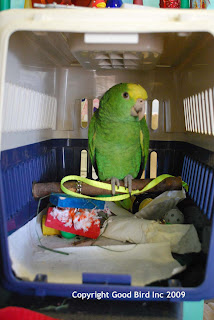 Joker, the Amazon parrot, was by far the star on this behavior. I had also loaded the crate with toys. He kept running in and out to play with different toys as well as get treats. At one point I worked with Jackson (the macaw) on another behavior in another room, Joker was being so quiet I had to check on him. There he was asleep on his perch inside the crate! The door was off the crate so he had the choice to be anywhere at all, and he chose to be in his crate. Woohoo!

Jackson also was a training superstar today. The behavior at which he excelled was harness training. Harness training can be a really difficult behavior. It often involves some manipulation of the wings to achieve. Many parrots are not too comfortable with this. Because of this it is really important to focus on pairing positive reinforcers with the situation. Fortunately Jackson is a sucker for a good head scratch. He practically melts. Using head scratches as his reinforcers Jackson sat calm as can be while I gradually adorned him with his harness two times. It is really important that Jackson views this behavior as something that results in copious amounts of good things. And right now he is learning harness time, means scratches galore. 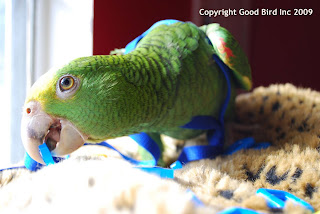 Joker is also working on the harness, but doesn’t respond as enthusiastically to head scratches as Jackson. This means using other reinforcers to train this behavior. One reinforcer Joker likes is playtime. He will roll around on his back and kick his little feet up in the air. Right now I am pairing the presence of the harness with playtime, toys and also food treats. He is progressing a little slower than Jackson on this behavior, but his excellent crate training makes up for it.

My reward was some playtime with both birds after our nice training sessions.