The Baby Parrots Take a Trip 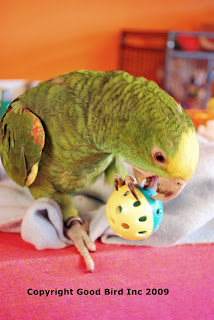 What an adventurous day. The baby parrots took a small excursion….. planned of course. So far both Wrigley and Beni have had the chance to spend time in each room of my house and also the back yard. They now appear relaxed and comfortable in these environments. This means it was time for us to push the envelope and try a completely new environment. I had done quite a bit of training to get both birds ready for spending more than just a few minutes in a crate for travel. And it paid off. Both birds entered their crates without hesitation. I had already worked on walking them around the house in the crates, and also placing the crates in the car and taking a short drive around the block. Today we took it a bit further and drove to my friend’s house.

I packed a familiar perch, lots of treats and a few toys. My friend had recently hurt her ankle and was stuck in her room with her foot propped up on a pillow. Time for some feathered entertainment! I placed the crated parrots on the bed. I set up the portable perch. Now it was time to open the crate doors.

One of the things that never ceases to amaze me is how what you think will be so predictable often ends up being exactly the opposite. I was so sure Wrigley the double yellow headed Amazon would be calm as a cucumber and Beni the blue throated macaw would be wide eyed about the new environment. Instead Beni could have cared less. He was just thrilled to be hanging out with people and sucking up tons of attention. He flew with confidence to the perch, to my hand and to the top of the crate. To him it was just another room.

Wrigley on the other hand had to take a moment to observe his new environment. He then launched into a few loops around the room before finally landing on his familiar perch. But once that moment passed he was all about exploring, flying to my friend for treats and playing with toys. That was actually my favorite part. The fact that both parrots were comfortable enough in just a few minutes to play with toys was a great sign. It also meant all that time spent practicing behaviors in new environments was working. Beni and Wrigley are learning to generalize their behaviors. This is an important goal for these future ambassadors for their species.

Although they did really well in the new environment we did have one small set back. The crate training suffered a small breakdown. Beni was not so eager to enter the crate for the return trip home. This means the short drive was too big of an approximation for him.

Training Beni to crate has been a challenge from the start. I think this is because his first experience in the crate was a 4 hour drive from the breeder’s place to mine. This was more than he was ready for at the time. This has meant a lot of work on this behavior, and no doubt we will spend another session just practicing some repetitions of going in and out of the crate for our next sessions, and building our approximations from there. Even though there was a slight glitch, the good news is we can get back on track. Thankfully, even less than perfect situations can be turned around with a little positive reinforcement.

We have introduced the traveling crate to our Goffins Brutus. and have taken him and the Cockateil with us to our mountain property. Brutus the Cockatoo seems very content and rides his perch like a pro!