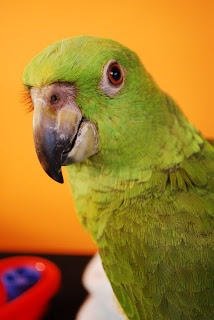 Delbert sure is a doll! Very handsome, and those eyes!

I've been acclimating my CAG Nickel to accept new places since she came to live with me a little over a year ago, and now she is eager to go to new places with me. I can't recall a time in the past six months when she's exhibited nervousness at being in a new place & meeting new people. She is shy, but as long as she she is either on or near me, she seems to feel safe & likes to interact with others.

I fully agree, reading body language is a top priority. Since realizing this, my amazon (Cairo) has become much less of a terror :)

I totally agree changes can be really frightening to parrots. I could recall my Senegal Parrot, Kermit frantically panicking when attending his first bird outings.

But after constantly bringing him out to new places, letting him socialize and meeting new friends and people every week, he appears more to be more confident and less intimidated by the changes around him.

Since then, I've always make it a habit to bring all birds out for gatherings every week.