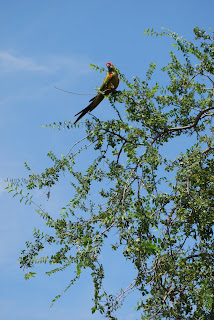 Losing a parrot can be heartbreaking! And it can happen to the best of us. I was thrilled to receive this success story about Scarlett, the African grey parrot. I hope it inspires more people to be prepared for a possible parrot escape. It does not take much to have all your tools in place and it can certainly make the job of recovering your parrot a lot easier. Thank you to Keith and Christine for allowing me to share their story with you.

We recently joined a bird support group near Cincinnati and as an organization we showed your video "Get Your Bird Back" to the membership, with DVDs up for sale. This occurred last Sunday and Wednesday my African grey parrot escaped out the back door. We tried to call her but she flew higher and higher and we lost sight of her.

While we had not completed obtaining all the materials you suggest, we had a carrier and most importantly had already trained our two year old bird to step up to us and strangers and to fly to us. We placed the flyers, the Internet ads, newspaper classified, called zoos, vets, TV stations and police departments and then tried not to go crazy with grief.

Yesterday we received a call from a woman who was on a scenic bike trail about 10 miles from our home. She had been out walking and then stopped at a local park where she was near a nature center booth. A man came off the trail and reported he saw a bird on the trail. He stopped and had the bird step up on a stick. This gathered attention and he moved the parrot away and then tried to wrap the bird in a small towel ( He knows nothing of parrot care but he was smart!) She did bite him and then flew away. This woman went to the nature center and asked about the story and then called a vet she used ( the same as mine) and the word was out! This woman called me, my breeder form Columbus Ohio called me, our organization members called....... the hunt was on.

I arrived at the bike trail about an hour later and the woman who called me started walking back up the trail to find the bird, as we kept in touch, she heard another biker say they saw a group of people with the bird up the trail. I drove to that end point of the trail and the woman caller and myself closed in the gap between us but never found the crowd of people or any other reports.

My wife was on her way to this area and immediately called the police department and reported the bird missing. They did not seem too interested at first but my wife made it personal for the officer with her loss and then he wrote a more accurate report. She then drove to a point on the bike trail where we were and we started getting people to different spots up and down the trail to look. At this point, the lady who called left, but not without taking flyers to post near where she lived and she said she would contact local vets near her. (She is a bird Saint!)

We posted fliers on the two ends of the trail and then my wife and I were going to walk the 4 miles of the trail from each end again to meet in the middle as it was getting near dusk. I was then called by the police department with a report that a bird had landed on a basketball goal near a man who was mulching in the town nearby.

I raced, and I mean raced to the house and saw no bird on the goal but another man said the one who was mulching had the bird. It seems that when Scarlett came to land near the man on the goal, his wife thought he was being attacked, but he was calm and told her to go get crackers. He knew it was a pet by the band on the leg. The bird flew to his shoulder and started eating. I taught Scarlett to fly to me this way. He then walked into his garage and put down the door. (Smart!!!)

We found Scarlett inside, put her in the cage and asked for water which she took out of a bottle. She is home now and I am thanking all of those involved including you. Thank you for the video and the help. While we knew we may never have found her again, we knew that you gave us the best chances for success. We are your fans forever.

http://www.goodbirdinc.com/
Posted by Barbara Heidenreich at 8:49 AM

I've been there before. Fred, my blue end yellow macaw was training freeflight and suddenly a strong wind took him from his path. All I remember is watching he flying away, looking back as saying "how do I come back?" And from that moment I spent 3 days running after him, and he was trying to fly back but unfortunatly days started to be too windy and he was afraid to fly down, by the time he was not a very good flyer (still isn't the best). Well, 3 days later without sleeping (I would stay under the tree in the night)and starvation of us I was so nervous, I couldn't think about eating, neither he could... Well, after this torture time I took Rui and Salvador (other two macaws who live with Fred) to the place he was, as soon Fred saw them he gave up TRYING to fly down, he just closed his wings (I didn't know they could do that) and threw himself from the top of a 30m tree to his way down. Fortunatly he felt over a lower tree branches and leafs, didn't hurt and could fly back to me.
Stressful 3 days for me, Fred and all friends I could bother.

I wish everybody could have a happy ending as we did!

My name is Dallas I live in Edmonton Alberta Canada and my African grey flew out of my garage on August 31 2012 I'm sick to my stomach. While I was looking for her that night a couple came home from the movies and seen her sitting above there garage and heard me calling for her and for some reason didn't come tell me. The women decided to tell me the next morning when it was to late she was gone again can you believe that:(

Im sorry to hear about your bird Dallas. Did you see this article? It hasa info to help you.http://www.goodbirdinc.com/help-escape.html

My African grey parrot flew away on Tuesday, 29 July in the morning around at 7:45am, while my watchman was cleaning the cage and left the cage door open by mistake in our backyard.

We have had Tweety (that's her name) for almost 7yrs :( we miss her the most. She wasn't talking at all but only whistling, yet we loved her as she was our family.

We live in Dar es Salaam, Tanzania. Unfortunately we don't have any good organization that could help us find out missing parrot. Locals here would sell it to someone else if they find African grey parrot.

I hope and pray she comes back to us soon. We have left the cage outside with her favorite strawberries and water in it.

Definitely read this for more ideas to help you get your bird back. It takes some active effort on your part. Waiting probably wont do the trick http://www.goodbirdinc.com/help-escape.html