Introducing a Child to a Parrot 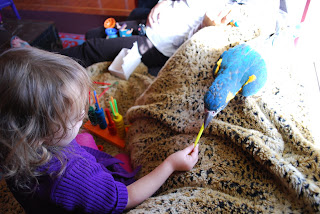 Blu Lu the Blue Throated Macaw made a new friend today. Before she arrived at my place I am not sure if Blu Lu had met any children or not. But her initial reaction to Camryn showed she was not sure kids were to her liking.

When three year old Camryn first arrived at my house she had “happy feet.” She was dancing and wiggling until she found some parrot toys to play with. Blu Lu flew up to a high perch and looked down on the activity. After awhile she was willing to come over to the adults in the room to munch on some pellets and pine nuts. Pretty soon Blu Lu was willing to stay put if Camryn moved closer.

Eventually Blu Lu decided her belly was full and head scratches and cuddling were in order. Camryn’s mom and I were both happy to oblige. This again paired a positive reinforcer with the presence of the little girl.

Camryn joined us on the couch and brought a slew of parrot toys with her. After a while this proved to be too tempting for the much more relaxed Blu Lu. Camryn shared the toys and Blu Lu discovered kids can be fun!

The process took about an hour and a half, but it is time well spent. For Blu Lu to be a great ambassador for Blue Throated Macaws it is important for her to feel comfortable around the many different people she may meet in the years to come. Today was a great start on that training.

Here is a short clip of some of the interactions. Enjoy!

Hey Barb, I would have happy feet too if I got to play with a baby macaw. ^_^ I look forward to see Lu blossom into a skilled bird ambassador, oh what fun you guys will have!