Sirocco the Kakapo: What to do about Parrot Aggression

Second in the series of blogs on training Sirocco the kakapo. Click here to read the first blog. 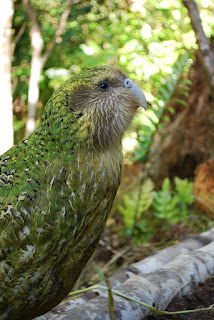 Sirocco finally did show some of his undesired behavior. But it wasn’t sexual behavior, it was aggressive behavior. Every night after a pleasant session in the public display area of his enclosure, Sirocco would be released to roam about the larger off-exhibit section. At the top of the hill in the off-exhibit area is where Sirocco had a supplemental feeding station. Each night we had to climb the hill to clean and restock the station.

Kakapo are inactive and slow moving during the day. At night they are an entirely different creature. They can run through brush with incredible speed. When Sirocco heard us at the top of the hill, he raced to meet us. Although Sirocco does many things that are very parrot like, kakapo are at the same time so different from any other parrot I have encountered. I studied his body language as he approached us, trying to determine if he was interested, sexual or was it something else. There were three of us there trying to understand what this bird was communicating. When he tried to bite my boots it finally became clear. We definitely witnessed our first full on display of aggressive behavior. In addition to getting a better handle on body language associated with aggressive behavior we also needed to determine the triggers. We came up with a long list of things we thought caused Sirocco to aggress. (Movement, darkness, squatting down, location, and later I learned that male kakapo will also defend their bowls/territory.) In the end we decided the best thing to do is to have one person prepare his feeding station while he is being trained in the display away from the area where he aggresssed. Then when it is time for him to go explore we wouldn't be near his bowl to trigger aggressive behavior.

However we knew there might be other situations in which avoiding him might not be possible. After Zealandia he was going to return to Maud Island. He would have free range of the island and would likely be coming to visit the rangers at their houses. This meant there could be a situation in which Sirocco might show aggressive behavior. Knowing this we decided it would be worthwhile to train him to do a behavior that is incompatible with attacking. We decided upon stationing. In the display on Zealandia we had already been  training this behavior. A series of logs and stumps made for great training stands and stations for our evening sessions. Our plan was to make several stations near the houses on Maud. If Sirocco had enough history for being reinforced on a station he may very likely choose to go there to get reinforced rather than aggress. Also rangers could redirect Sirocco to his station prior to any undesired behavior being exhibited.

To reduce the likelihood Sirocco would show aggressive behavior near his feeding station we started training him in the daytime. As I like to say he was a “rock star.” He immediately grasped the concept and proved once again how eager and ready he was to learn. As you can see in the clip we gradually added criteria to his stationing. For example we increased the amount of time between delivery of reinforcers. We added some of his known triggers such as movement, squatting down and turning our back to him. By training in the daytime we took away one of the factors that seemed to contribute to aggressive behavior. This allowed us to have successful interactions that we could reinforce. Overtime we could gradually add training this behavior closer to sunset and finally in darkness. As you can see from the video, Sirocco was all about it and ranger Linda did a great job training him. Next time: Sirocco Talks!

What a beautiful bird! And so well behaved...Now if only I could follow your examples with my birds.

I'm GOING to follow your example with my bird. It's clever yet so simple! Thanks so much Barbara. And it's so cool to see these amazing tools used with such a rare and magnificent NZ bird. What a treat!

wow. the focus that bird has is astounding! so intelligent.

I also liked the way he just sat there and waited...he did a really great job of training you guys to deliver the goodies. LOL

Ranger Linda was very astute with her observations -- you were lucky to have such excellent students :)

This whole situation is really awesome and it is really amazing to watch conservation in action. But honestly, all I can think of when I watch these vids is how stinkin CUTE Sirocco is!!! I want to squish his little face! (possibly not the most effective training technique though ...)

I love your work, Barbara. I can only hope that Sirocco realizes how lucky he is! I can't even imagine what it would be like to work with such a magnificent parrot - I really should have discovered my passion for parrots much earlier in life - I do rescue work now and I'm just fascinated with their behavior.

I love your work, Barbara. I only wish I had discovered my passion for parrot behavior earlier in life but I'm happy with doing parrot rescue work now and having the opportunity to work with and be around these magnificent creatures! Thank you so much for sharing your experiences.

Wow! That is fantastic! I do have a question...do you believe it was easier to begin working with him because he was a bit lethargic in the day time hours? If so, how would that translate to working with our parrots that are on a normal daylight schedule?

I noticed how he's so well camouflaged in his natural environment, not just the colors but also some feathers look just like ferns... he's beautiful, thanks for sharing.

I noticed how he's so well camouflaged in his natural environment, not just the colors but also some feathers look just like ferns... he's beautiful, thanks for sharing.

I hear you Joanna! It is hard not to fall for that face. And he definitely has a personality. Thanks for making me giggle ; )

In regard to the working the bird in the daytime question. For Sirocco we dont know for sure, but we think because kakapo are so well adapted for nightime he was more in his element and more likely triggered to present aggressive behavior at night. If we trained in the daytime it was because he came down on his own (we didnt wake him intentionally to train). I would say if a diurnal bird was intersted in a session and showed more calm body language as the sun goes down, it could be an option. Ultimately it would depend on the details of the situation and the individual birds response. I guess a lenghty way of saying I would need more information to decide if that would help or not for the bird in question. lol.