Sex and Sirocco the Single Kakapo

This is the fourth in a series of blogs on Training Sirocco the Kakapo. Click here to read the series from the beginning. 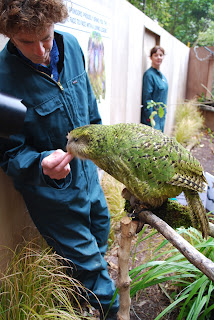 The main reason I had come to New Zealand was to address Sirocco’s undesired sexual behavior. What I had learned about kakapo natural history is that the males are extremely motivated to copulate during breeding season. With companion parrots we often advise people to remove all the environmental triggers that increase hormone production and associated reproductive behaviors. This might mean keeping light cycles the same, offering a less rich diet, removing access to nest sites, avoiding mate like bonds with your parrot, etc. These tend to work really well at keeping parrots from going into what people like to call a “hormonal” state.

However Sirocco would be living outside, roaming an island like a wild kakapo during breeding season. (Which by the way I thought was awesome! How many animal ambassadors get to do that?) There would be no way to control the environmental triggers that lead to hormone production for him. And as mentioned in a previous blog the mating strategy of this species is very different from the parrots typically kept as pets. The males will call for a female for up to eight hours a night for three months. They will mount nearly anything that passes by their bowl. And once they engage they have been seen mating up to an hour and a half. This is a very sexually driven parrot!

My plan for Sirocco would not be the same one often suggested for companion parrots. Instead my goal was to redirect Sirocco’s sexual behavior to something other than someone’s head. Once that relationship was established the goal would be to offer the new object as a reinforcer for desired behavior. For example, if Sirocco wandered up to a ranger house in search of some action, he could get exactly that for doing the right behavior. In this case when envisioned him stationing on one his stations. His reward could be access to the object for mounting. 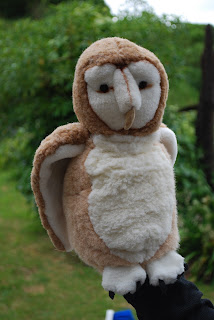 The “object” has become quite the fascination. Years ago I had won a barn owl puppet in a raffle at an IAATE (International Association of Avian Trainers and Educators) conference. Because kakapo have a facial disc they are often called the owl parrot. Even their scientific name Strigops means “owl face.” I decided to bring the owl with the hopes it might be able to replace people’s heads as the object for sexual behavior. I knew it may not be the object we ended up using, but I figured it would be good to have something just in case.

By the time we introduced the owl Sirocco was already hip to how training worked. We used a target and treats to get him interacting with the owl. It was quite adorable when he gently squeezed the stuffed owl beak with his own beak. However at this point we had not seen any sexual behavior.

One night after a great training session, Sirocco started to work his way to the top of the hill. He stopped half way sat down and started booming (It is hard to hear the booming in the video You might need headphones). This is the low frequency calls the male kakapo make when seeking females. Sure enough he climbed up team member Daryl’s leg and started copulating with his head. I thought this is our moment! I presented the owl near Sirocco’s feet and eventually got him on the owl. I lifted my arm with him on it. Sirocco then climbed to my head. (Yes I had my head humping moment. I suppose I need a T-shirt that says “I was humped by Sirocco”) I presented the puppet at his feet. We traded Daryl’s arm for mine inside the puppet and now Sirocco was on the puppet on Daryl’s arm. This is when a wonderful thing happened. Sirocco made another attempt to get on Daryl’s head when he didn’t have success he redirected to the puppet and starting copulating with it! It was our sign that our training goal was achievable.

Although the owl was a big hit for the media, it soon became clear we needed an object that could be left with Sirocco. Holding a puppet for 40 minutes of humping was not realistic.

Sirocco has a history of stealing Crocs® shoes and taking them back to his bowl. We decided these might be a better object. While I was there we didn’t have the chance to try a shoe out. But since then I mailed a care package of eight Crocs® to Sirocco. I will share more on Sirocco's training and hopefully will be able to update everyone on how Sirocco’s training has progressed since I left in the next blog. Stay tuned!

AAAAAAUUUUGGGGH Sirocco is the cutest creature alive. Must scratch neck for making of floofy face.