Sirocco the Kakapo Finds Love in an Unusual Place 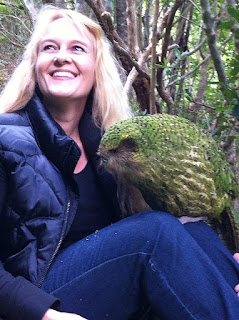 Crocs shoe company I hope you are listening because I have a story for you. Those of you who have been following my blogs on training Sirocco the very rare and endangered kakapo may recall he has a little behavior problem.

Male kakapo are very unique parrots. They double in size in preparation for breeding season. They climb mountains and build bowls in the ground. They sit in these bowls and “boom” for females eight hours every night for three months. They hope their exquisite vocalizations will draw in females for a midnight rendezvous. They will mate with as many females as they can in a season. Once mating is over the males go back to being solitary, nocturnal parrots, discretely roaming the forest floor of their predator free islands. They have nothing to do with the chicks or their mothers. In other words a male kakapo has only one thing on his mind when breeding season rolls around….mating!

On the one hand this is a very good thing. There are only125 kakapo left in the entire world. We need the boys to be very interested in making babies. Sirocco, on the other hand presents a unique case. Sirocco is imprinted on humans. His preferred partner is a human head. Because male kakapo are so driven to mate, Sirocco can be relentless in his efforts. This has lead to aggressive behavior directed at people not receptive to his advances and injury to Sirocco when one person attempted to thwart his overtures. My job was to help address his obsession with mating with human heads.

Last year we successfully transferred his affections to a stuffed owl. However upon learning kakapo can mate for 40 minutes we abandoned that idea. Hello Crocs! The team informed me Sirocco had a history of taking Crocs shoes from the ranger houses. By the time we decided to try a shoe, I was already on my way back to the US. Plus Sirocco was not sexually motivated last year. This year was different. Sirocco was most definitely interested in mating with heads.

It was time to test all of our hard work. Our goal was to teach Sirocco that presenting an acceptable behavior would earn him the opportunity to mate with a Crocs shoe. Sirocco had already learned how to target, station, step up, move from point A to B when cued and more. His reinforcers in the past had all been favorite nuts. It was time to see if access to a shoe could also be used to reinforce good behavior.

Sirocco certainly demonstrated he was interested in mating. He made many attempts to climb to heads when the opportunity was there. The team started looking for the tiniest body language that meant he wanted to mate. In those moments we asked him to target or station. If he responded we offered him the shoe. As you can see from the video the reaction is pretty strong! It seems to be a combo of amorous and aggressive behavior.

Whatever it was, it worked! Sirocco responded quite strongly to the Crocs. He did so well, we kept raising the criteria. We started making heads more tempting. We targeted him to climb onto a head and what did he do? Nothing! As one ranger put it “In the past he would not have been able to help himself.” We also tried a few other things that often get him going, like walking quickly down the trail. Fast moving boots used to be quite a trigger for Sirocco to attempt to climb up a leg and work his way towards someone’s head. Instead he targeted away from feet when prompted.

The plan was working. Sirocco was doing acceptable behavior and it was getting reinforced with the opportunity to mate with a Crocs shoe (or a favorite treat). This was HUGE! Sirocco is a well-loved ambassador for the Kakapo Recovery Programme. Although his behavioral issues made him famous, at times they made it difficult for him to do his job. And more importantly his safety came into question. Now we had a way to manage his behavior and make sure his interactions with people were safe.

People often ask why we did not train Sirocco to mate with a female kakapo. Fortunately Sirocco is well represented in the gene pool. His services as an ambassador bird are currently more important. So for now the only object of his affection will be his beloved Crocs shoe whom we have officially dubbed the “Krokapo.” Like many conservation programs, kakapo recovery is dependent on funding….what do you say Crocs? I see a beautiful relationship developing between your shoes and a very special species on the brink of extinction.