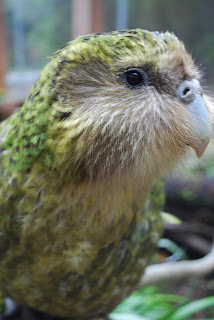 Animal training is always a thrill. There is a special moment that happens when an animal understands what you are trying to communicate. I swear there is an adrenaline rush associated with it for the trainer. And I often wonder if it's the same for the animal? A part of me thinks it is because you often see a little change in the reaction from the animal. It's like they realize they have solved the puzzle! As you can imagine it can be quite difficult to pick out just three special training moments in a year full of animal training. But here goes! Here are my top three…… and a runner-up.

1.    Sirocco the Kakapo: It would be hard for any animal training I've done to compete with the experience of working was Sirocco the kakapo. There are many factors that contribute to this. First the training addressed a very serious behavior problem. One that had in fact put Sirocco in danger. There is a great satisfaction knowing the training has helped ensure his well-being. Also rewarding was seeing how the rangers were successfully applying positive reinforcement training with Sirocco while he was on display. One ranger described it as “being introduced to Sirocco's brain.” I liked that. They definitely have a greater understanding of how to work with this very special parrot. And of course playing a small role in the conservation of these amazing parrots was the icing on the cake for me.

2.    Elephant Training at The Santa Barbara Zoo: One of my regular gigs is consulting with the Santa Barbara zoo on animal training. We do often work with the elephants, but during my last visit we encountered a very difficult training challenge. Susie an Asian elephant had already been trained to wave a eucalyptus leaf with her trunk. The problem was whenever the trainers tried to switch the leaf for a different object Susie would eat the new object! We tried a few good different strategies, all of which failed. We really had to put on our thinking caps to solve this problem. We decided to start with reinforcing for giving up the eucalyptus leaf when cued. We did fast repetitions of this. Next we paired the leaf with another similar object, such as a piece of bark or twig. And repeated the process. After more fast repetitions we slipped the leaf out of the equation. Success! Susie gave up the bark instead of eating it. We repeated the pairing of the leaf with several different objects and practiced phasing out the leaf. We then just started offering her novel objects, and as we had hoped she did the behavior instead of eating the new objects. Although the behavior doesn't seem very difficult, it really was for this particular elephant. It was a huge accomplishment and a big thrill for all the trainers involved when Susie chose to give up an object rather than eat it. I was even jumping up and down I was so excited over our success! Those are moments when trainers get that rush I described! 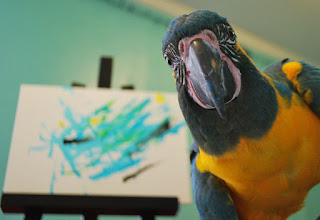 3.    Training my Macaw to Paint: My macaw Blu Lu certainly isn't the first animal to paint. But she may be the first parrot to paint pictures of other parrots. And she is the first parrot I've trained to paint. This was another behavior that was not as easy to train as one might think. Getting a parrot to pick up a brush is no problem. Training the bird to strategically place that brush on a piece of canvas is a lot more difficult. Once again I had to think strategically to determine the approximations I was going to use. I don't want to give away too much because detailed instructions will be in the next issue of Good Bird Magazine, but in a nutshell I used a variation of a retrieve to get this behavior. The best part is that all of Blu Lu’s paintings were raffled off to raise money to save parrots in the wild. When all was said and done about $4000 was raised and donated to blue-throated macaw conservation project the Bird Endowment. 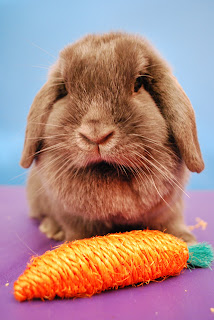 Runner Up: Training Veterinarians to Train Rabbits: I teach parrot training workshops all the time. I usually know what to expect when we bring a group of 20 parrots into the room and have people try to train them. Some will work, some will be too nervous, some won't be motivated to eat until later in the day, and some will be simply fantastic.  Each parrot offers us a learning opportunity and in most cases we get some behavior out of just about everyone.  This year I repeated the process with 20 rabbits. Just like the parrots, the rabbits came from a rescue. These rabbits had never participated in a rabbit training workshop before, so there was no way to predict how they would react to a new environment, new people and the training. We were all pleasantly surprised when almost every single rabbit eagerly participated. Not only did they participate, they all learned several behaviors throughout the day. Best of all the veterinarians got to practice using positive reinforcement to teach rabbits to cooperate in their own medical care. I am thrilled that so many veterinarians are on board with incorporating training into their day-to-day practice. It is the wave of the future!

Here are my top 3 non animal training related moments of 2012:

1. Meeting Bruce Springsteen……. He really is nice!
2. Singing “Ramble On” with Robert Plant and 200 other lucky fans at my favorite music venue.
3. Spending an evening of laughter with the wonderful John Ellis before he unexpectedly left this world too soon.

A new year starts in just a few hours. I hope you will add some animal training experiences to your year in 2013. Teaching your parrot to target, turnaround or maybe even step up can really bring joy into your life and your parrot’s life when you train with positive reinforcement. Indeed it will be a very Happy New Year!

Barbara, you are blessed to be doing such important and interesting work. Congratulations! May 2013 bring you even more awesome assignments. Thank you for sharing what you do. You're not only so giving of your knowledge, but an inspiration to the avian/animal community.

Barbara: your three moments are at once inspiring and heart wrenching. Thank you so much for sharing what you do and guiding us all in our quest to be better parrot guardians. Cheers, Gord Roberts (and Scooter our Green Cheek Conure)

I am interested in Recall training. I have a new rescue CAG and I would like to work with her. How can I get started? I would perfer if it was cost effective, and not kill the wallet.

Thanks for approving my comment. I hope to learn as much as I can about my new CAG.

I have been working with my CAG trying to get her to say Daddy. She came to me with a good vocal set already.

I'm so happy to see that coming to Louisville and working with the rescue rabbits at the AAV Conference made your list of memorable training moments as "runner up". It was an honor and a privilege to work with you and Dr. Brown, Barbara. I'm hopeful that these workshops will open the door to veterinarians looking at rabbits in a new way, thank you.

My DVD on Training your Parrot to Talk will help with get all those vocal behaviors on cue and add new ones. I also have some new products in development to help with your other training goals. I will be sure to post here when they are available.

Thanks Mary for making the rabbit training workshop a reality!! It was great fun.