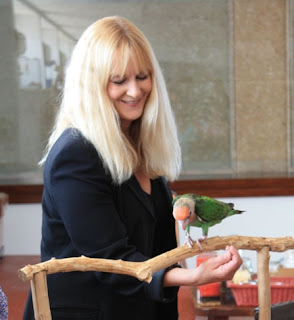 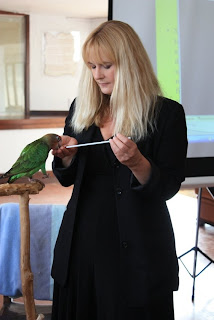 Darn, I wish I had thought to ask you about recall and flying to a perch on Saturday at BEST! All of our birds are unclipped, and my Timneh Grey and Cockatiels are good fliers.

I'm happy you enjoyed your stay in Portugal, I have to say both I and Pepe, the cape parrot, loved you workshop. It was wonderful and I've learned a lot. I've read your book and have you DVD, but for an inexperience owner, there is nothing like seeing live how you interact with birds and how they respond to you..... so anyone out there who has a chance, please go and see Barbara in a workshop it's worth it! You also get to meet so many birds and "bird people".

I'm so happy with Pepe, he's doing really well with his training and the best part is that he loves it, he gets really excited and starts offering all the behaviours we learned so far, he's so funny :-)) so now he are working discerning the behaviour and cue. We love training and Pepe is definitely a pig, so it sure makes things easier for me, the newbie bird companion.

Hi Barbara! I'm glad you enjoyed Portugal and had fun with the people and birds you've met.
It was definitely great to have someone like you sharing the knowledge and the power of positive reinforcement and training.
I wish you could have come to the Algarve and spent a few days enjoying our beaches and see our place.
Hopefully there will be a next time...

see you in Albuquerque.
Take care