Alone, but not Lonely, with Parrots 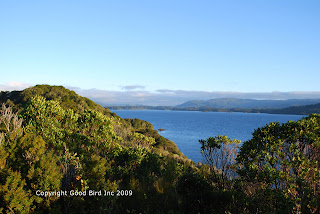 I had an entire island to myself. An entire island I tell you. And not just any island. A island that is home to rare and unique species that have never seen a predator. Not a single one. This lead to a weird birding experience for sure.

“Petah” my “Skippah” met me at 9:00 AM to provide a 5 minute water taxi ride to Ulva Island. On the way he pointed out fairy penguins bobbing in the water. I couldn’t see them, but managed a “I think I see them” to continue in my denial that my eyes are wimpy at best. 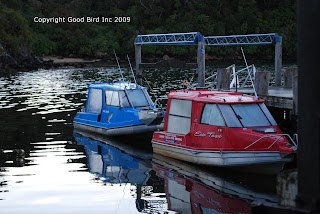 Peter told me I was the only one visiting the island that morning. He is the only water taxi service running at the moment so I guess he should know. He told me he would be back to meet me at noon.

I started up the path and right there in front of me were two little Kakarikis (New Zealand parakeets) Up in a tree was a Tui singing his amazing song. 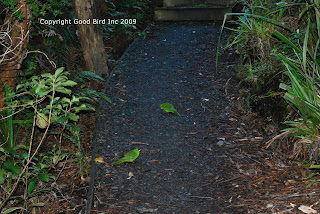 At the first beach I spotted the infamous Weka. As it was an early special sighting I cautiously moved closer, snapping pictures. What an idiot! After about ten minutes of creeping around the bird, the Weka practically hopped in my lap. 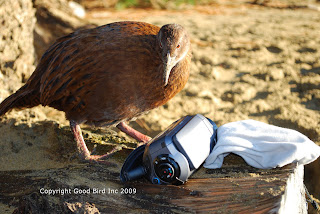 I was told you can nearly step on birds on Ulva Island due to their lack of fear having had no experience with predators. This was too cool. Every beach I encountered had few Wekas who literally were more curious about you than you might be of them.

As I trekked through the wooded parts of the Island I kept an eye out for one of my main bird objectives…the Kaka. This forest parrot is known for being super smart and bold with humans. Being a good bird watcher, I would stop and listen, move quietly and check for movement in the trees. I did manage to see quite a few of the species famous for making the island their home. But no Kaka.

On one side of the island I discovered the Fantail. This little bird practically flew to my feet. This is because he hopes you will stir up some bugs as you tromp through the sandy beach. Having a blast with Wekas and Fantails I was a bit slow to leave the gorgeous beach and work my way back to meet Peter. I realized I was going to have to book it fast so as not to be late. 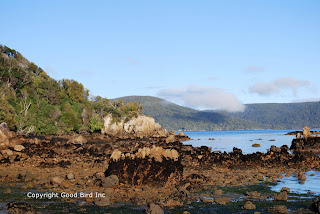 As I practically ran through the forested island trails, birds were coming out of the woodwork. It was then I realized this is opposite to any birding experience I had had in the past. Instead of quiet, you are supposed to be a big ol’ clod and make noise. Suddenly little Tomtits were my best buddies, a flock of Creepers foraged over my head, the Kakarikis gathered and what did I finally see? A Kaka! Right there off the trail. He could care less about my presence. And of course I only had 10 minutes to get to the boat on a trail that is supposed to take 45 minutes to walk.

Fortunately Peter understood my tardiness. He obviously has an appreciation for the native wildlife and Ulva Island. On the way back he brought the boat to a screeching halt two times. One so I really could see a group of fairy penguins up close in the water, and the second time to see a yellow eyed penguin taking a break on the surface. Thanks Peter. It was the perfect end to a perfect day, alone on Ulva Island with parrots.

What an amazing experience you had! So glad you finally got to see the Kaka, even though it wasn't the way you expected!