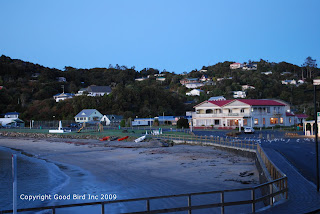 Four hours driving followed by a rolling ferry ride and I am on Stewart Island. Snacking lightly on Dramamine kept the “barfies” away. Yippee.

When I arrived the sun was setting. My host was waiting for me at the boat with a van to whisk me to my very own private cottage…make that my very own private cottages,…. make that my very own efficiency complex. Yup. I am the only one here. Not even the caretaker spends the night. I am loving it as it actually feels like I am a local with my own property in this tiny community. The total amount of paved roadway is 26 kilometers for the whole island.

I grab a flashlight (Or torch as they call it here. Which to me means big giant flames to signal the occasional car, but in reality means wussy pale yellow circle on the ground) and wander down the hill to the only restaurant/pub in the hood.

At the pub there is actually a guy with a shirt that says “orginal gangsta” so now I KNOW I am in the real hood….population 300. I order up a “Tui”…the beer named after the bird. As I sip my kiwi beer “Doug” whose nickname for tonight is “Dave” tells me an interesting tidbit of news. Stewart Island is home to the “Singles Ball.” For the last five years “Dave” has organized an event for singles from around the world to meet and be merry on the tiny island. He gets sponsors, live bands, an endless seafood buffet, beach bonfires and 250 people! People have come from as far as Denver, Colorado. So far two marriages have resulted from the event. I noticed no ring on “Dave’s” finger, so I am guessing he hopes to one year find a female fit for a fisherman at the ball. If the rubber boot fits…..! 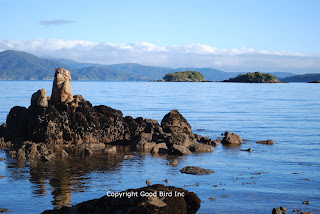 What does this have to do with Kakapos? Well the singles ball is in August. And once a year a Kakapo is brought from the Kakapo Recovery Project to even tinier Ulva Island, which is a short water taxi ride from Stewart Island. So if you are single AND want to see a Kakapo, pencil in August and September for a vacation in New Zealand. You can visit the Pub (farthest south in the world) where I met “Dave”. Who by the way is nicknamed this because he was wearing a sweater today that resembled that of an alleged serial killer named Dave.

What an evening. My thoughts of serial killers quickly dissipated as I enjoyed the most outrageous starry southern night on my walk back to my cottage. Even David Lynch could not make up this place.

Barbara,
Great to read of your travels to Stewart and Ulva Islands. We were lucky enough to spend time on both and loved our experiences. So few people...so much history, beauty and wilderness. We were able to see both of the NZ parrots during our stay - very cool.

Thanks for sharing your journey. Susan