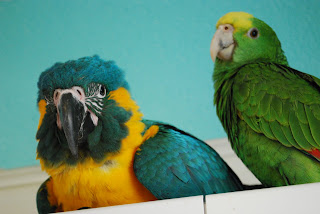 Recently I mentioned that the young parrots at my house had been given new names. This created a few puzzled responses from folks. I thought I would elaborate as I now know a bit more about how the new names were chosen.

The double yellow headed Amazon parrot was previously called Joker. His name was given by the breeder with the thought that it might be changed at some point by the folks at his new home at the Kaytee Learning Center. This was the same situation for the blue throated macaw formerly known as Jackson.

The staff at Kaytee had a brainstorming session and came up with some clever ideas.

Jackson’s name was changed to Beni, because this is the name of the region in Bolivia where blue throated macaws are found in the wild. This macaw species is quite endangered. Connecting his name to the plight of his wild cousins can help raise awareness to parrot conservation.

So there you have it! Beni and Wrigley. I have to admit their new names have grown on me.

I suggest checking out my FAQ behavavior problems page at this link http://www.goodbirdinc.com/parrot-behavior-problems.html#5 See question 5. My Parrot Only Likes Oner Person in the Family. How Can I Teach Him to Like Me and Others? That should give you some ideas to help you get started : )
Barbara