Training a Parrot to Lie on his Back 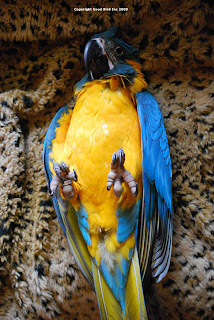 “Uh, excuse me! You need to stop being so cute. Really. I am having a tough time getting to all those other responsibilities I have.”

I think that is the inner dialog I have whenever I am working with Jackson. But seriously look at that bird! How cute is he? Makes a person just want to play with parrots all day long. Doesn’t it?

Believe it or not, this is a behavior I am training Jackson to do. (Not look cute. He does that on his own.) What I am training him to do is lie on his back. He actually learned to do it in record time.

I will explain the steps I used to train this behavior. Jackson will step up readily. He enjoys sitting perched on my hand for attention, treats and head scratches. With Jackson perched on my hand I started the behavior by gently bringing my right hand towards his back. I reinforced him for remaining calm and relaxed. Sometimes I reinforced with a treat and sometimes a head scratch or cuddle. Overtime he became quite comfortable with my hand resting on his back.

The next step was for me to bend slightly at the waist and support Jackson’s back with my right hand. I then straightened back up and offered him a treat. This method allowed Jackson to experience being on his back in tiny increments of time. Eventually I extended these intervals to about 30 seconds.

At this stage I wanted to work towards having Jackson hold this position without having his feet hold onto my left hand or using my right hand to support his back. This meant moving to the couch as seen in the picture.

This time when I bent over, he rested on my palm on the couch. Overtime I was able to slide my hand out from under him. He also began to gradually loosen his hold on my left hand with his feet. This allowed me to cover him with head scratches which he adores. Next thing you know, Jackson doesn’t want to move from his new favorite spot on the couch. Ah, the power of positive reinforcement!

Great, thanks for sharing. I have been wanting to get my severe macaw to lay on her back.