Parrots and Sense of Smell 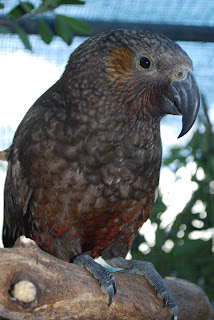 I always find it interesting how knowledge changes. We are told one thing for years and then suddenly Whammo! There is undeniable evidence that what you have heard for as long as you can remember is inaccurate.

Remember when everyone used to think parrots were trying to dominate you? Thankfully that notion is for the most part eeking it’s way out of the parrot community. But here is one that I have often thought about and finally have evidence! Do parrots have a sense of smell? Certainly the physical evidence shows they don’t have a lot of receptors for scent. We are also told their taste buds are limited compared to ours. However we certainly see parrots respond eagerly to foods they appear to like. We can only assume taste must be involved in there somehow.

Scent on the other hand has still been a big question mark for me. I often ask myself if they have a poor sense of smell why do parrots emit such interesting odors? Those of you who have Amazon parrots certainly know what I mean. There is a very strong odor that seems to emanate from their respiratory system. That odor must mean something to someone. And my guess that someone is another Amazon parrot.

I have had this discussion with many veterinarians and we often come to the conclusion that perhaps they have scent receptors for that particular odor. However even with that information I have never noticed a parrot actively smelling something. I had never observed a parrot investigating something with his nares in the way a mammal might with his nose.

On a recent trip to New Zealand I finally met a parrot who clearly responds to smells. The bird in question is called a kaka. They are similar to a kea, but smaller and browner in coloration. The keeper told us this bird responded to smells. And she was right! He would press his nares against your hair or skin, inhale and then preen himself. You could actually hear him inhaling as he did it. The keeper mentioned they often offer strips of fabric with different scents on them for enrichment. She said he responds with great enthusiasm.

Here is a video clip of Robin Shewokis and me getting sniffed.


We were also told that a researcher is currently working on testing scent detection with kakapo, kea and kaka and has some interesting results. I can’t wait to read that paper when it is ready. Time to perhaps officially change one of the truths we have often held to be true about parrots. Exciting!

Being owned by an Amazon, I can attest to the scent. What amazes me is how many humans can't smell it!

Thanks for the video, Barbara, it really shows the bird sniffing around! I'll also be interested in the study.

Thank you for posting this. I've always been doubtful of the accuracy of the "can't smell" issue.

great post~
I do hope they do not use scents from petro-chemicals for this lovely bird to smell. These can be quite toxic especially for birds.

Theraputic grade essential oils on the other hand can be very healing and healthy for birds.

Dr Melissa Shelton is doing a lot of work with captive parrots and essential oils.

It's very interesting ! Thank you for this article !
Good evening !
Anne

I am quite confident they are careful with the scents they use : ) This country is extremely protective of their native species. I was told the research is published so I am sure I can get a hold of the article to confirm.

Very interesting, Barbara. I too am interested in reading the research. I have started using Aveda products recently and after a shampoo, my amazon will stick her
head in my still damp hair. New behavior for her so perhaps it is something in the products that she is finding interesting.

I will be very interested in the results of this test or any findings. I have 2 birds that do exactly this, a pet Eastern Rosella hen and a pet Red Rump Parakeet hen.
No cockatiels I have reared as pets have done it. I am sure birds must have some sense of smell.

Perhaps I'm not as observant as I should be, but my guys & gal do not appear to be smelling antyhing. Does the fact that they have a dry tongue inhibit any sensory receptor? Although, they know what they want to eat first, so must be some kind of smell/taste reception going on
Therese

I'm also puzzled by the references to parrots having no sense of smell.

I have found that my Galahs (Rose Breasted for the Northerners) appear to distictly identify when potatoes are fully cooked when I'm cooking them on a stove. Almost without fail they would/will notify me that 'their' potatoes are cooked and ready. This was quite noticable compared to most other vegetables that I cook for them/me.

I've been keeping an eye on other smell indicators for a number of years, however, this has been the most obvious.

A most interesting article, thank you for posting.

Could a sense of smell be more useful to parrots which spend a lot of time on the ground? NZ parrots often do (and of course kakapos do nothing but ;-)), and it's not unknown for the larger Aussie parrots to roam about in the grass.

Here is one study about this subject. It focuses more on nocturnal species vs diurnal as opposed to the ground dwelling aspect. http://www.ncbi.nlm.nih.gov/pmc/articles/PMC2701422/

my male cockatiels sure know when i walk in the room with fresh hot pop corn!! They start getting crazy, and if i dont leave some for them, they beat me to the couch lol

I believe that birds have at least some sense of smell. I do a lot of my eating and drinking out of clay mugs, and I've noticed that even though my DYH Amazon can't see what's in the mug when I bring it into the room, she somehow knows she's interested in it when it contains bean chili or fresh vegetable juice, but not when it contains ice cream or tea.

I thought I'd try the smell test on my 7 year old Meyers Parrot. He was on my shoulder when I was drinking coffee, which he refuses to drink out of the cup or off of my finger when I off it to him (cold from the cup). I took a drink and gently blew into his face. He could not get the flavor of the coffee off of my tongue fast enough. I do not let him into my mouth as a rule, so this was unusual behavior for him, but he sure knew there was something yummy in my mouth when he smelled the coffee on my breath!
Karen Kettering
Canyon Country, CA

Funny, i just wrote about this in my last book. My African Grey, Pickles, loves Sesame Snaps and is very familiar with the package it comes in. At Xmas, my mom's gift for Pickles was 3 packages of Sesame Snaps wrapped together in one plainly wrapped package. She walked up to Pickles, held it out in front of him and he dove for it, ripping it apart as fast as he could. Any other time, if you walk up to him with something like that, he will be reluctant to take it but he KNEW what was in there - even though the package was 3 times the size of the normal one pack of Sesame Snaps.

I hope Karen Kettering isn't actually giving her bird coffee. I'm right in assuming that continuing to do so will eventually kill the bird, won't it?

I am writing a dissertation on the responses of birds to herbaceous/medicinal plants and was wondering whether you knew any links to papers regarding olfaction senses in birds? As I have heard that they do not have many taste buds or a good sense of smell.

birds or parrots? as mentioned in the blog, there has beem a study done comparing new zealand parrot species. And of course kiwi and certain vulture species are well documented. I am sure you could find the new zealand one with some googling. The looked at kea, kaka and kakapo.

This is very interesting. I notice with our Greys that they smell absolutely wonderful after being outdoors. I have wondered what causes this. They always have the faint smell, but it becomes far more pronounced when they have been outside. It is the same with the almost 'baby powder-ish' smell of our cockatiel. I have to assume these personal aromas, as Barbara has stated, are for the benefit of their potential mates. But that would mean the mate would have to be able to smell them for them to be of any use in luring a mate. I have long been interested in the aromatherapy for birds but am still hesitant to use anything - even essential oils - with a strong odor. Thanks for a great post, Barbara!

hello, I have worked on the olfactory abilities of kea, kaka and kakapo and I am happy to send my two articles (more to follow) to people who are interested, if in exchange I can learn a bit more what sort of olfactory behaviour / sensitivity to smells and scents people have experienced in their parrots.
I would like to use that information for a PostDoc research, where I am looking at exactly the olfactory abilities of parrots.

I own a Green Cheeked Amazon aka Mexican Red Head. As for taste, he definitely has his favorites - pizza, french fries and some bird treats. I was wondering about sense of smell. If he is in another room, he knows when I'm cutting an apple and wants some. I can only assume he can smell the apple.