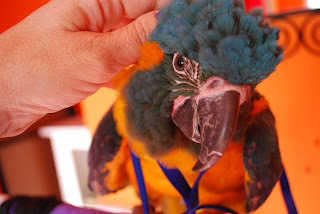 People often warn of the dangers of petting your parrot. Usually they are referring to the kind of touching that leads your parrot to believe you two would make lovely children together. This might include stroking under your parrot’s wings or near the base of his tail. This is often accompanied by your parrot affectionately regurgitating some smelly gooey food to share with you. This then often leads to your parrot attacking anyone who dare comes near the two of you…. a literal pair of lovebirds.

Touching parrots in a way that encourages courtship and sexual behavior is “just asking for it.” In other words you are setting yourself up for behavior problems that could include aggressive behavior, chronic egg laying, territorial issues and more. Check out Pamela Clark’s article on Hormone Production in parrots in the free sample of our digital publication Good Bird Magazine for more on behavior problems resulting from reproductive behavior.

Humans are super tactile creatures. We just love to touch things. And touching our pets can be a magical experience. My friends who visit my house say they get to be Snow White when they are here. Birds land on their heads. Small furry mammals hop into their lap and snuggle up against them. I love playing Snow White too and I could not imagine it being as much fun if I did not get to touch the animals. Therefore petting the parrots and other animals in my home is a big part of life. However it is done with forethought. Especially when it comes to parrots.

People tend to pet animals from the top of their heads to the tip of their tails. This does work for many mammals. Birds on the other hand…not so much. Parrots can get used to being stroked this way. But I would say it is not their preferred method to be touched. Most parrots prefer to have only the feathers on their head touched. And get this…they want you to stroke towards the beak, not the tail. A parrot who is enjoying having his head scratched will fluff all of his feathers up in response to touch. Check out Delbert, my yellow naped Amazon parrot enjoying a head scratch.

A few favorite spots on most parrots include under the beak, nape of the neck, over the ears and just above the nares. Parrots can’t reach these feathers to preen. Therefore they rely on other parrots or their human companions to take on this task. I believe this is why they are more receptive to touch on their head’s as opposed to other parts of their body.

There are of course parrots who do like having their bodies touched. Blu Lu the blue throated macaw is one such parrot. Even on her body she prefers the feathers are scratched opposite to the way they grow. As mentioned earlier I do have to be careful that touching her body does not lead to sexual or courtship behavior. So this is offered in moderation. I want her to be friendly with many people and encouraging a mate-like relationship with me will make that goal difficult to maintain.

Take a look at how your parrot responds to touch. Is he tolerating it? Or do you have a magic touch and he is getting a tad over stimulated? Hopefully you have found the happy medium, just enough to make it fun for you both.

We just had Dr. Strunk come do a talk at our Austin Parrot Society meeting about behavioral and medical problems that can occur if your parrot feels sexually attached to her owner. It was very interesting and I am glad you also covered this topic!

I am wondering if this is also gender specific? I've seen clearly sexual responses from male parrots when their tummies are rubbed, and from females when the base of their tails and backs are scritched, but not often the other way around. While admittedly anecdotal, I've been watching carefully for inappropriate responses in many parrot species and genders (when known) for about a decade now.
Additionally, I have a male M2 Cockatoo who, while sexually mature, loves to be touched / scritched everywhere by everyone, and so far has not shown any strong mating behaviors. (although there is some small amount of seasonal crankiness.)

Hi Tamooj!
I have not personally observed differences based on gender. However that is likely because I tend to keep my touching in the regions less likely to inspire reproductive behaviors. I will start asking at my seminars and see what others have observed.
Barbara

How would you go about getting them out of this sexual relationship factor in this discussion?? My 4 year old male African grey will let me touch him all over his body but since he was a young bird I observed that this was unacceptable and now only scratch his head and cheek feathers. I would like to enable my partner to give him a head scratch but my bird seems to have a very strong bond with myself. Is there any way that I can discourage his sexual behaviour towards myself and get him to eventually start letting other people touch him. There is only one other person that can head scratch him and that's my partners mother. Many thanks, kirsty

My tiels ( males) also love to have their beaks massaged.

I am sure glad for this blog. I have an African Grey. She is a female and I am a male. She loves men but is not unfriendly with women. Lately if I even pet her head and neck she can get really turned on, leading to egg laying.I avoid contact with her back always. Is this just a hormonal phase of the season, or do I look for another reason? I cannot fathom not being able to touch her, As she is too soft and cute!

I am going to direct you to a great article by Pamela Clark. It is all about the things that contribute to hormone production. Parrots are not always "in the mood" : ) And we can do things to keep it that way. The article is in a free sample of the digital publication Good Bird Magazine. Here is the link http://www.goodbirdmagazine.com/

Is there a good way to go about this at first? we bought our conure at a pet store when he was about a year old and he seems to HATE hands. I have gotten him to sit on my lap next to his cage but that is the extent of his human interaction.

You bet! Check out this video for ideas. http://youtu.be/oldGrfKxUaE