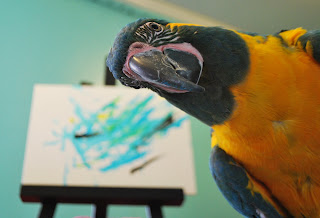 Posted by Barbara Heidenreich at 3:57 PM

ThanksBarbara! And thanks Blu Lu - your art is magnificent. See you at
AFA.

Thanks Blu Lu for drawing my name fot the beautiful art work. Barbara, I'll pick up the Green Wing painting at AFA if possible? Thanks Bill Christian

That would be perfect Bill. See you then.

These paining are source of motivation for those who leave work or away from their talent because of laziness.